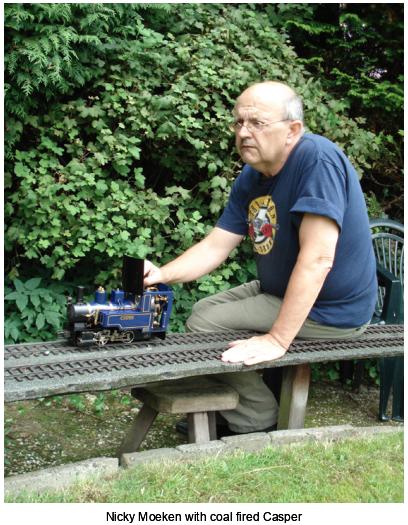 Driving into Deeping St. James, just outside Peterborough, the sun decided for the first time that day to stick it’s neck out above the clouds. In basking sunshine I arrived at Glendale Junction. Not the sort of shop you’d find in the high street, but set in a gorgeous stone-built village, full of goodies for the electric and steam rail fan.

As you would expect, the shop is filled with trains, wagons and accessories all for trains running on 45 or 32 millimeter gauge. Up until now, making locomotives move, has been done with the help of gas or electricity. With the introduction of the Dutch built Casper, Glendale Junction offers the best and least expensive way to start with coal firing in locomotives.

Coming down here, I brought two complete sets from Holland. Both were already sold, with a new shipment on its way in August. I say complete sets, because a coal fired Casper doesn’t come on its own.

In a handy wooden case builder Henk Bunte of Modelbouw atelier (workshop) from the city of Apeldoorn in Holland wanted to give the modeler a complete start in getting his hands dirty with coal. Nothing was left to chance. You open the box and rakes, shovels, (char)coal, oil and a blower are all included. Ah right, there’s no water! 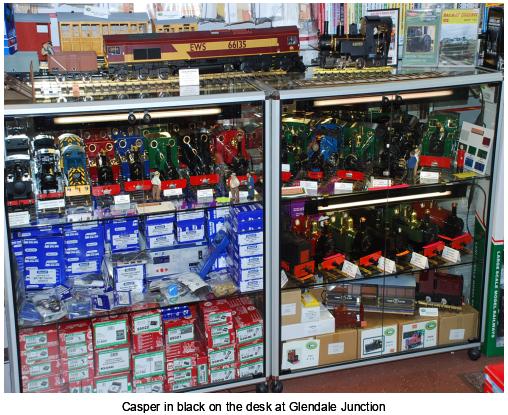 It’s clear, owners Brian and Caroline, want to offer everything, although comprehensive, for the serious train modeler. They have invested in a great selection of Accucraft and Roundhouse locomotives and have recently taken on the beautiful Chinese wagons and locomotive of Gauge One from Kent. Electrically LGB, Piko, Aristocraft and Bachmann fulfill the roster, so there’s also no shortage on rolling stock.

Surprisingly Glendale Junction offers far more than you’ll find in the average model shop. It starts with their 1:22,5 railroad, built around 45 millimeter track at the back of the shop. It’s divided in two segments. As you would expect, the original part is an electrical railroad, ornamented with buildings from Piko and Pola, as well as some scratch built examples. It’s not in a specific timescale, but it gives a starting train driver a great feeling of what can be accomplished.

On the other side of the garden 32 and 45 millimeter ovals have just been finalized to show off the capabilities of various Live Steam engines. Using gauge one track and with limited space it means that the radius and rail code (250) doesn’t allow for most Aster and some other Gauge One locomotives. All in all, this garden with its railroads is an awesome sight.

One of the aspects of building a garden railroad is overlooked by most shops. G.J. hasn’t stopped just offering Trains, rolling stock, accessories and buildings. They’ve also found a local company that supplies them with gorgeous viaducts , tunnel portal, bridges and buildings in concrete.

Of all the model shops I’ve visited throughout Europe and America Glendale Junction exhibits the dreams of two enthusiastic people, which we modelers benefit from. And really, with the introduction of the coal fired Casper, you won’t feel wanting wandering through the shop and garden.


Powered by the Spirit CMS